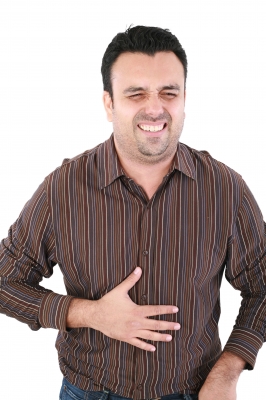 When you eat modern bread wheat, do you experience bloat or congestion?

If so, you’re not alone, and that appears to be one of the reasons some people are eating einkorn, the world’s most primitive wheat.

Elizabeth asked einkorn followers, “Anyone out there who’s gluten intolerant but able to eat Einkorn?” Read the answers she received… 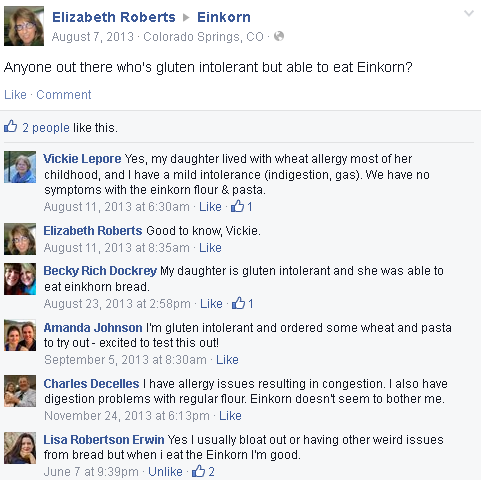 First, I contacted a group that researches ancient grains.

You can watch their seminars on the history of wheat here. I asked them about the qualities that make Einkorn more digestible than other types of wheat, and this was the response from one of their nutritionists.

“The good concentration of several antioxidant compounds (carotenoids, tocols, conjugated polyphenols, alkylresorcinols and phytosterols) and low β-amylase and lipoxygenase activities (which limit antioxidant degradation during food processing) contribute to the excellent nutritional properties of [einkorn] flour, superior to those of other wheats. …It appears that the improved digestibility of einkorn is because of its starchstructure. Quality, texture and nutritional characteristics of flour and derived foods are influenced by starchstructure, content and composition. Because of the tightly packed starchstructure of einkorn, the amylose is more slowly digested than amylopectin, thus lowering glucose and insulin levels in the blood after meals and maintaining satiety longer.J Sci Food Agric 2014; 94: 601–612In a 2003 study, researchers at the Royal Veterinary and Agricultural University, in Frederiksberg, Denmark, compared three different loaves: einkorn bread made with honey-salt leavening; naturally-leavened einkorn bread made with crushed whole grains; and commercial yeast bread made with modern wheat. The naturally-leavened einkorn loaves significantly reduced the gastrointestinal response of GIP (glucose-dependent insulinotrophic polypeptide), a hormone important in controlling insulin secretion.  European Journal of Clinical Nutrition, October 2003; 57(1):1254-61″ Mary W. Extension Nutrition Specialist

This response, along with many research articles I have read, gave me some answers to why Einkorn may be more digestible than other wheats.

Reason #1 – The Unique Starchstructure of Einkorn

Einkorn’s starchstructure, (the composition of the different starches within the wheat grain) is not only much smaller than modern wheat but much more compact.  Each type of wheat carries two different kinds of starches. Amylose and Amylopectin. Amylopectin is the faster releasing and digesting starch, which is amongst the culprits that quickly spike blood sugar. Amylose is the starch that releases slowly into the digestive system which in return is absorbed slower. Einkorn’s starchstructure is made up of much more of the slow digesting Amylose than Amylopectin.  Einkorn’s unique design in it’s starchstructure assists in the, “lowering (of) glucose and insulin levels in the blood after meals and maintaining satiety longer” as is said in the first article above. But that’s not all. Einkorn also has less Amylose than other grains. Showing that overall, Einkorn has less of both of the starches that spike your blood sugar.

Reason #2 – The Protein Composition Of Einkorn

The other reason that Einkorn is more digestible is because of it’s protein content.  Over time wheat has been modified so much that it is estimated that 5% of proteins in wheat are new ones.

Modern wheat has been crossed with two different goat grasses over time. One of those goat grasses contained the D genome of gluten which has been the source of the most  intolerance. Gluten is made up of two proteins found within different grains. Glutenin and Gliadin.

Along with changes to wheat, these proteins have been altered too. Example. Gliadin is the protein that causes most of the problems with allergies to wheat. Einkorn has a higher ratio of Gliadin to Glutenin, yet has been found in multiple studies to have a far less affect on those with allergies.  According to this study, it probably has to do with the rich amino acid composition that lies within the Einkorn Proteins.

Remember Einkorn Contains the Original A genome of gluten, whereas Modern wheat also contains the D Genome of gluten, which has brought with it so many changes to the protein structure of wheat. You can tell when you work with Einkorn versus Modern Wheat that the gluten is quite different. The gluten in modern wheat allows for it’s elasticity and high rise. When I work with Einkorn the dough it is not as elastic and breaks down quicker. Which is why kneading for long periods of time is not necessary, it will begin to break down the proteins of the dough.

It needs to be noted however, that Einkorn contains gluten and has not been scientifically proven to be ok for those who suffer from celiacs disease, and that any one with gluten sensitivities should consult their Doctor before consuming Einkorn.

One of the things you will notice when baking with Einkorn is that it doesn’t need as much water as when you are baking with modern wheat. This is because modern wheat absorbs more water than Einkorn, which assists in it’s higher rise.

The nutritionist also noted a study which tested three kinds of breads, with three types of leavening. And mentioned that “The naturally-leavened einkorn loaves significantly reduced the gastrointestinal response of GIP (glucose-dependent insulinotrophic polypeptide), a hormone important in controlling insulin secretion.”  Naturally leavened loaves were significantly lower in the gastrointestinal response of GIP than those made with commercial yeast, which has a direct affect on lowering the glycemic index of the bread! Natural leavening, sprouting wheat berries, and soaking them are three ways you can increase their digestibility. One of our Einkorn kitchens solely uses natural leavening in their breads, and we are excited to share more in future posts about the natural leavening process along with sprouting and soaking!