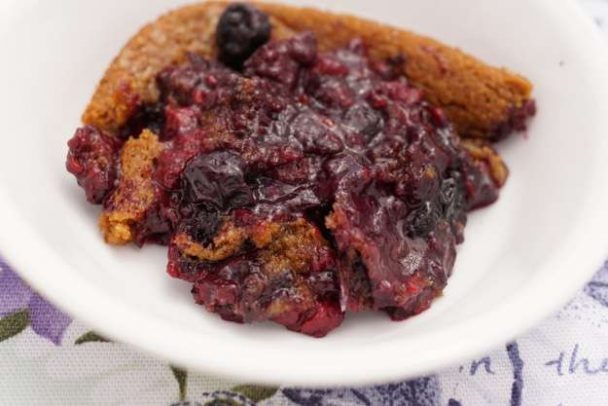 Summer is approaching! I was never big into camping growing up, but I have been a few times. I just wasn’t a super fan of sleeping on the ground, not being able to shower, and mosquitoes. But one thing I always enjoyed was the food! There is something about camp food that is just fantastic. One of my favorite food memories was dutch oven cobbler. I remember mixing it up and setting it in the hot coals for what seemed like forever. Then we ate it on paper plates we would burn later. The fruit was so hot, we couldn’t eat it nearly as fast as we wanted to. But there was something magical about eating something so sweet sitting under a blanket of stars, watching as the orange flames stretched up until they disappeared into smoke. While a small campfire raged and crickets chirped, the rest of the night in those Idaho mountains was still. Even an in-doorsy person can appreciate that. Cobbler still reminds me of summer and the good parts of camping.

This cobbler doesn’t require a dutch oven to be amazing, but if you are good with one, you could try it. For me, though, this cobbler is the perfect opportunity to get that summery feeling without the mosquitoes. Almost any fruit will do, but what says summer more than a berry combo? We chose blackberries, blueberries, and raspberries and are very happy with the decision.

It is super easy to mix up, and then it’s just a matter of waiting for it to bake. We use whole grain einkorn flour and unrefined sugar. Add that to the berries, and it’s really just not bad as far as desserts go. In fact, it’s pretty nutrient dense. I think you need this recipe to complete the magic of summer. Enjoy!