Milan. Middle Ages. Rice had become very popular in Italy and Spain, and was about to be introduced the slow cooking style that was popular in the city. By cooking rice in broth, the versatile and flavorful appetizer risotto was born. Now risotto has spread and is popular all over the world and isn’t only eaten as an appetizer. I first ate risotto in Spain and enjoyed the creamy texture and savory flavor. However, white rice isn’t exactly the best thing to put into our bodies. I thought, “Why not try it with einkorn?”

Little did I know I was not the first one to hatch this plan. Einkorn performs very well in this Italian classic and we reap excellent health benefits on top of it. Anyone who has experience with einkorn knows that its flavor is out of this world. I’ve asked a lot of people why they switched to einkorn. The most common answer is digestion, but the second most common is flavor. So, this isn’t a matter of “health instead of taste.” But while we’re on the subject of health, einkorn is infinitely preferable to rice nutritionally. It’s much more nutrient dense and has 18.2g of protein to brown rice’s 2.6g. Einkorn is naturally lower on the glycemic index than rice, and eating the berries instead of flour makes it so that it enters the bloodstream less quickly. Let’s not forget how much einkorn adds to the texture of this Italian dish. I call that a win-win-win! 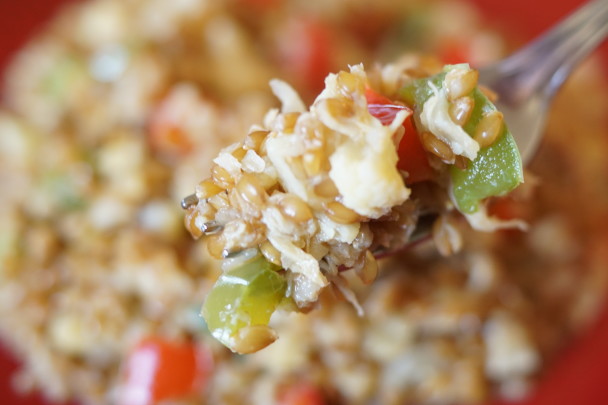 We shot in the dark with this recipe, but it turned out delicious. We took what we know about the risotto-making process and adapted it for einkorn. We used peppers, cauliflower, and chicken, but risotto can handle almost anything you want to dish out (pun intended). Feel free to use any vegetables you have around the house. Meat? No meat? Go for it. Einkorn risotto will leave you reeling.

1 thought on “Einkorn Risotto: The Italian Classic New and Improved”