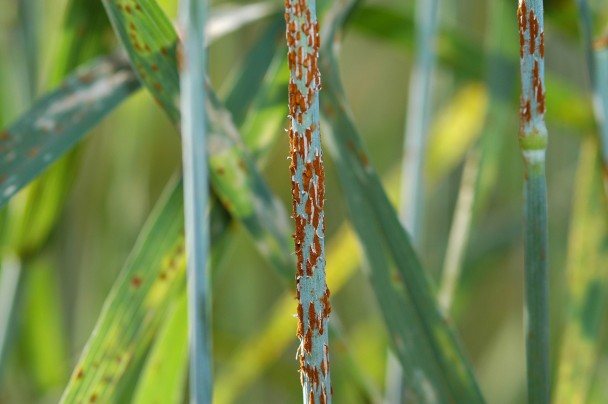 Overseas scientists are desperate. A type of stem rust is threatening a most crucial cereal crop. This isn’t just any kind of fungus. It’s Ug99, or Stem Rust. This fungus climbs up the stems of wheat and within a matter of weeks, brings the wheat to it’s knees in a tangled black mess on the ground. The scary part of the fungus is that it travels by wind.

Stem rust has been around a long time.  In fact Rome (384 – 322 B.C.) had a Rust God that they offered sacrificial animals to in hopes to relieve them of this disease. It may have even contributed to the downfall of their empire. Over time and many year later scientists discovered a way to control the outbreak, but in 1999 a virulent strain broke out in Uganda. From Uganda it traveled on the wind up through Africa, into Yemen, and across the Red Sea to Iran. It is now headed towards Pakistan and India.

This would be devastating to these countries. Wheat is the most widely grown cereal crop accounting for 35% of their caloric intake. In addition, it brings in the sole income for many farmers in these areas.

This is why stem rust is on so many people’s radar, scientists and government alike. This strain can affect 90% of wheat crops. 90 Percent.

This is where Einkorn can save the day. Einkorn is not one of those 90%.  Einkorn carries the Gene Sr35. Researchers have determined that Sr35 has a near immunity quality to stem rust, and if they can pin point it, they can use it to stop the disease of stem rust.

This news attributes again to the incredible species that Einkorn is. Not only is it nutrient dense, low in heavy metals, carries the completely different gluten A genome for gluten, but there is high hopes that it will come to the rescue of the rest of the wheat family.

1 thought on “Can Einkorn Save Us From Stem Rust?”