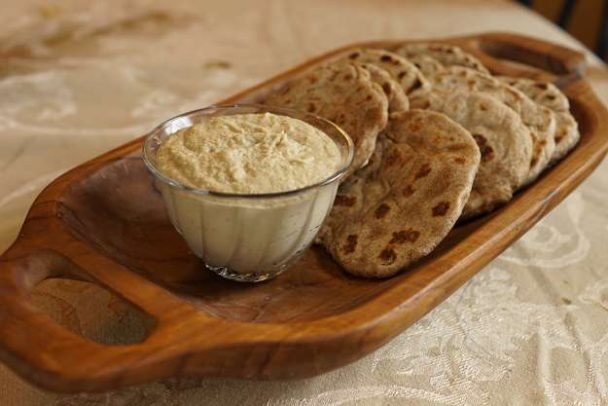 Ignorance is not always bliss. For much of my life, I was ignorant to the greatness of our lead performer for today. We’ve finally perfected a soulmate for our Einkorn flatbread. Introducing…Hummus! By way of clarification, I do not mean to say that I had never heard of hummus. Of course I had. But I refused to try it. On what grounds? It’s humiliating, really. When I was first told about Hummus, my brain instantly went to a little stone we kept in our shower for scraping off dead skin – Pumice. Needless to say, that thought did not make me eager to branch out and try it. If you too are ignorant of hummus, don’t worry. It’s nothing like that.

It wasn’t until I was living in Spain that I finally decided to try hummus, and I was hooked. I made it part of my weekly shopping list. I generally ate it with crackers and enjoyed it immensely. Spain, of course, cannot boast the original hummus (the brand I bought was Simply Greek).  In fact, that’s quite a debate. As early as the 13th century we have record of hummus. An ancient Egyptian cookbook called Kitāb al-Wusla ilā l-habīb fī wasf al-tayyibāt wa-l-tīb contained a recipe for a hummus-like dish made with pureed chickpeas, vinegar, pickled lemons, and some herbs. Some argue that Hummus was around before that, and countries do not agree as to who had it first.

In 2008, the Association of Lebanese Industrialists were upset about the success other countries were having with the commercialization of hummus. They insisted that hummus is strictly Lebanese and petitioned to have protected status.  Since then, countries have been having competitions to see who can make the largest batch of hummus. Lebanon holds this record as of 2010 when they managed to make a 23,000lb batch. The controversy, however, rages on. While they’re distracted, fighting about who it belongs to, I think we should eat some!

Hummus has gained popularity in modern times. There’s even a Hummus Day. It was last week in fact – Friday, May 13th. So, I’m a little late on this post, but it’s never too late to celebrate! The ancient dip can now be found everywhere, but making your own ensures clean ingredients. We developed our own quick and easy recipe for the dip and love it. We would love to share it with you. 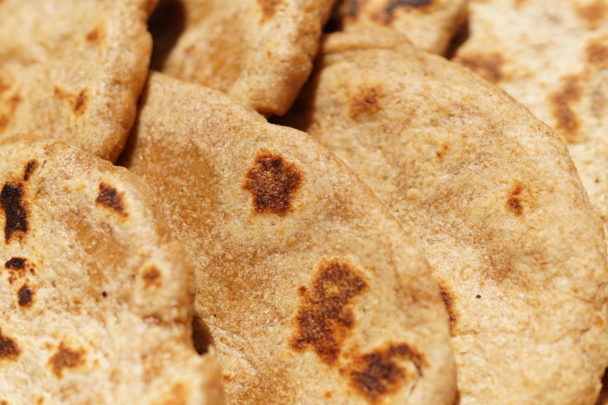 We also found that it goes excellently with our delicious soaked einkorn flatbread. Seriously, this combination is dynamite. Flatbread is an excellent no-fuss way to get the health benefits of Einkorn without the hassle of leavened bread, and this flat bread is especially awesome. It’s soaked in kefir or yogurt. That process breaks down the phytic acid and partially digests the grain so that we get more nutrients from the bread and can digest it more easily. It only needs a suitable companion. Enter hummus. The combined flavors of this pair will literally knock your socks off (ok maybe not literally). We hope you enjoy!