In the past week, our family has enjoyed several beautiful and delicious einkorn foods, including bread, tortillas, muffins, pancakes, waffles, and pie (crust). With each delicious food, I am reminded of the unique qualities of this dandy farro piccolo.

The first reminder comes about 2 minutes after the first bite. I don’t get the saliva drench and I don’t feel knots in my gut. That’s my favorite part.

I also love the taste. It is unique and works wonderfully in so many foods. For example, our naturally leavened einkorn bread has a delicious, light nutty flavor, perfect for sandwiches or toast. The tortillas add richness to our Mexican dishes.

Yeah, einkorn really brings a lot to our family dinner table but also in our fields. (More on this in a minute)

Einkorn is the most ancient species of wheat on earth, impressive in nutrition and taste. It rises above common wheat of today in protein, lutein, minerals, and vitamin E. It carries the A genome for gluten which does not even register on the Elisa test for gluten, and is low in heavy metals like cadmium, a known health damaging culprit.

So what is the wheat we have today? What’s it’s story? Why is it so different from Einkorn?

Simply put, once upon a time 10,000 years ago in the fertile crescent, farmers domesticated a close relative of Einkorn with a grass family, and then it was hybridized naturally and commercially multiple times. this resulted in the many different types of wheat species we now have. 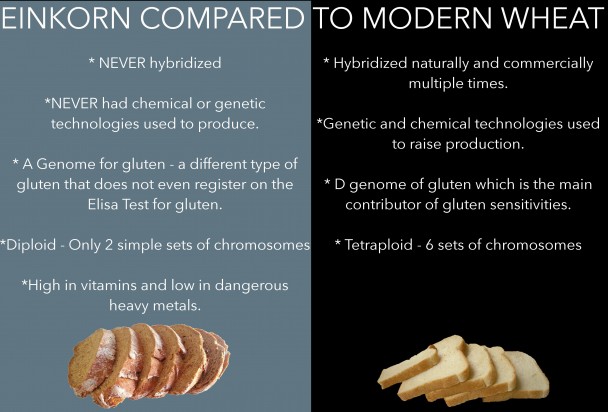 Why you may ask? Einkorn wheat is difficult to harvest, it has a glum (think husk like) that binds to the seed making it time consuming to harvest.

Bring in the current hybridized wheat of today, and sure, they are easily harvested and have a larger grain, but they falter in nutrition and are purposefully altered to increase gluten, which is low in nutrients, inhibits absortion of nutrients, and triggers inflammation.

Now, in the name of progress comes GMO’s jogging up beside us. Short for Genetically Modified Organism, these Scientists are now mutating plants with other living organisms like bacteria, viruses, and other plants. Their purpose? To create plants that will increase production and be resistant to pesticides and herbicides.

What’s wrong with that? It certainly sounds innocent enough.

The startling research has shown with tests in animals, potentially pre-cancerous cell growths, smaller brains, livers and testicles, partially atrophied livers, and damage to the immune system–with most changes appearing after just 10 days. Not to mention there are no current FDA standards required, GMO’s haven’t been around long enough to study the consequences in humans, and 60 other countries have already banned their use for fear of their ramifications.

Recently a surprising story hit headlines. A farmer in Eastern Oregon sprays his field with a weed killer, but the wheat he sprayed continues to grow. Baffled he turns to Carol Mallory Smith, a Professor at Oregon State University and hybridization and gene specialist. She tests the wheat…and as it turns out, it’s a GMO. This is shocking because no GMO wheat has been grown outside of specialized labs at Monsanto.

One of the reassuring traits of Einkorn is that it is immune from this type of contamination as it remains unable to hybridize with other strands of wheat because of its unique structure of chromosomes, but what does this mean for the future, of the rest of the wheat family?

Interested in the details of the testing of the GMO wheat and it’s consequences, I contacted Carol Mallory Smith, who was happy to share her findings.

Jade Koyle: Did this happen because of the field test that Monsanto was doing and then it cross pollinating with other fields?

Carol: I don’t think we have any idea…I mean and APHIS hasn’t been able to come up with anything, we’ve come up with a lot of different scenarios, and we are still struggling with how did it end up there? After so many years they hadn’t had it in the field.

Jade Koyle: Have you verified it’s a Monsanto variety or could it be some natural selection?

Carol: It’s not a natural selection, it’s genetically engineered. It’s not hard to run some molecular tests on DNA and especially be able to tell that it’s a transgenic plant.

Jade Koyle: Does it look abnormal?

Carol: No, the plants look normal, you’re just looking for markers that tell you it’s transgenic. The plants look like any other plant which is unfortunate that you couldn’t walk into a field and say, “That’s a changed plant.”(laughing)they should come in a different color but they don’t!

Jade Koyle: Can it hybridize through cross pollinization, for example throughout that field that it’s in and through other fields over time?

So however it got there, once you release a gene into the environment, you can’t just go, “Oh I changed my mind.” and get to put all of those things back. You don’t know where that last gene is.

It’s surprising on one hand, biologically on the other hand, it’s well, how things work in the field.

Jade Koyle: So the biggest question I get from people is “How do I make sure that I am not eating genetically modified wheat?” And they say “Is Einkorn genetically modified?” and what I tell them is that Einkorn does not hybridize with modern with wheat, so as the GMO wheat in Oregon is concerned, “It’s not going to hybridize with that, no.” So their question in the short term is how do I know the wheat I am buying now isn’t GMO wheat?

Carol: Well, if it were widespread they would be finding it. Other countries for years have been testing our wheat as it’s imported and haven’t found it. From that assumption no one has been receiving any GMO wheat. I cannot give 100% assurances but it’s likely that it’s not but because of how often the wheat is tested by other countries and by us.

Jade Koyle: So what are the concerns from here? I’m mean, obviously is it going to affect other fields and then how do you control it. Have they shut down that poor farmer and he’s now in a bad spot?

Carol: I don’t know what the outcome will be, they haven’t finished their investigation, APHIS is being very deliberate and conservative in their approach because they don’t want to make any wrong statements, and want to be very sure. It’s frustrating for us because we’d like something faster, but I think they are being very careful and very deliberate in how their approach to this is. That’s the bottom line that they are wanting to be absolutely correct about what they come out with. They have confirmed in their press release last week that they have done other testing and have not found anything except what was in that field so far.

I realize uncertainty lies with how the GMO wheat found in Oregon will affect other species of wheat, but it is comforting to know that Einkorn does not cross pollinate with modern wheat due to Einkorn’s primitive chromosomal makeup. The choices we have in wheat can be questionable, but Einkorn remains reliable in it’s hearty original state, full of nutrients and taste.